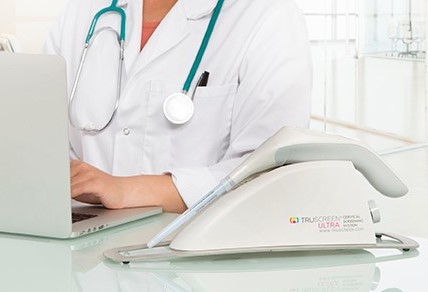 Truscreen Back For Cervical Cancer Screening

In Melbourne with chairman Tony Ho and chief financial officer Guy Robertson on a non-deal roadshow, Mr Dillon told Biotech Daily that in the decade since Polartechnics failed to commercialize the original Truscreen diagnostic, the New Zealand-based company had redeveloped it to be wireless, portable and connect to all smart mobile telephones and computer systems, providing immediate, single-visit diagnosis.

Today, Martin Dillon said that the technology worked by emitting light and an electric current to stimulate the cervix which “creates a tissue signature and reports whether it is normal or abnormal”.

Mr Dillon said that Truscreen’s sensitivity and specificity were “in the high seventies or low eighties and as good as a [Papanicolaou] test in a first world hospital”.

Mr Dillon said that a direct comparison had been trialed at Sydney’s Royal Hospital for Women an “it is expected the results will show that Truscreen is as good as a Pap test at a public teaching hospital”.

He said that Truscreen was aimed at the developing world where laboratory facilities were out of the physical and financial reach of many women.

Mr Dillon said Truscreen was available in China, India and Mexico and had been tested for regulatory approval in each country and other target markets included Russia, Africa, the Middle East and Latin America.

Mr Dillon said that 300,000 women died each year from cervical cancer and effective screening could reduce the fatalities.

He said that the device was Conformité Européenne (CE) mark approved for primary screening and would be sold to hospitals, clinics as well as government and non-governmental organization (NGO) programs, with the costs in the developing world “generally underwritten by government and NGOs”.

Mr Dillon said that Truscreen had cash and cash equivalents of $NZ1.3 million.

Mr Ho said that the company expected to list on the ASX in August or September this year with an initial public offer to raise $5 million to $8 million to expand the commercialization of the diagnostic.

You can view the full article in its PDF format on the link below.