TruScreen is a new technology used to detect pre-cancerous change, or cervical intraepithelial neoplasia (CIN), by optical and electrical measurements of cervical tissue. 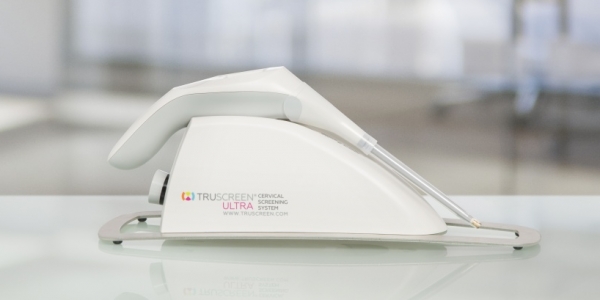 TruScreen’s breakthrough cervical cancer screening device is a viable and attractive alternative to traditional cervical screening methods. The TruScreen device resolves many of the ongoing issues associated with Pap tests, including failed samples, poor patient follow-up, patient discomfort and the need for supporting laboratory infrastructure. These issues are particularly pertinent in low- and middle-income countries (LMICs) – key markets for TruScreen.

The development of the device was led by leading medical academics from Sydney University, Professor Malcolm Coppleson and Dr Bevan Reid, who sought to establish objective technology that improved upon the conventional Pap test. The researchers subsequently settled upon opto-electrical technology to detect cancerous cells on the cervix.

The TruScreen device is currently the only opto-electrical real-time cervical screening system certified for use in multiple LMICs.

TruScreen has been extensively evaluated in studies involving tens of thousands of women globally, and it has been shown to detect cervical cancer and its precursors just as frequently as a conventional screening.

TruScreen is an objective, self-checking digital system that can be used with minimal training of medical or paramedical staff, and without the infrastructure and resource costs associated with cytology-based screening. As with other screening techniques, acute infection must be treated before screening.

TruScreen is the only objective, immediate optical-electrical test currently available. TruScreen has been shown to be more acceptable to women than a Pap test. Women strongly prefer being given an immediate result.

TruScreen is a cost-effective test that can be used outside the established laboratory infrastructure and has high potential to aid in reducing cervical cancer mortality.

TruScreen has been proven more acceptable to women than a conventional Pap test. A comparative study between the use of TruScreen and the conventional Pap test at the Whittington Hospital in London showed that TruScreen was associated with significantly less pain, pressure and scraping than experienced with the spatula or brushes used to collect cells from the cervix in cytology based screening. Women also strongly preferred access to an immediate result.